Two weeks on from the first brew, and I am pleased to report that all the hard work paid off! We have two very successful beers as a result, though they turned out perhaps slightly differently taste-wise to how I expected.

I’ve learned a lot about the whole process now, from mashing through to bottling – and some of the downfalls along the way in each case.

Both are very drinkable, and I’d give them good marks (though they aren’t perfect!).

Here are some of the vital statistics!

7.5% ABV! A very successful brew. Good yield, but the high ABV resulted in a lot of yeast in the fermenter. This meant more yeast got into the bottles than expected. This is fine, but does mean I’ll put a note on the labels for the wedding for people to decant the bottles before drinking. One other lesson – even 40 litres of beer doesn’t need 100ml of hazelnut extract. Probably 40-50ml would’ve done! Onwards to batch 2 in December!

4.1% ABV – on the money for what I wanted. Yield slightly poorer because of all the mango pulp; that’s fine, we’re absorbing it into our costs but good to know. The ‘non-beer’ ingredients worked out as a lot more expensive. Lessons for this one include giving it more time in the first fermentation (with the bacteria – L. plantarum) to get a lower pH naturally before adding the lactic acid. This is doable by just giving it another 24h (starting it on the Thursday instead of Friday). I would hope this gives it more ‘natural’ acid, rather than having to add the powdered acid to get the acidity down (final pH was 3.3). While this shouldn’t affect the flavour too much (as L. plantarum ferments very cleanly and doesn’t create any acetic acid (vinegar flavour)) I might want to explore alternative ways to bring the acidity down. I also read that a little lime zest into the brew can do wonders for a bit of colour. Nevertheless, it’s a very bright and zingy beer and I almost prefer it to the first one – a good thing, given it’s a bit pricier and more burdensome to brew! 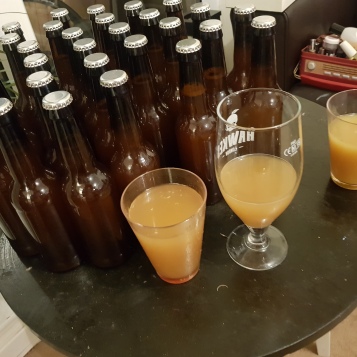 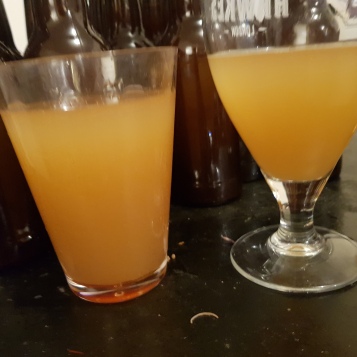