I am not a regular convention-goer, but I’ve tried to summarise my experience of DragWorld 2018 by using a few opportunistic and badly-taken long-distance photos and my own thoughts.

Layout & use of space

On entering, one is greeted with an immediate chance for a selfie/photo with the ‘DRAG’ letters, a giant pink stiletto heel and a compact mirror, the latter two had queues of people trying to sit inside and look comfortable while friends or conscripted passers-by struggled to take half-decent photos. 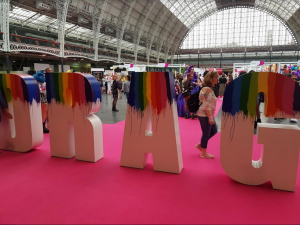 Next in view was the catwalk stage, which already had someone performing as we arrived – the music filled the venue (which on occasion caused a few problems when trying to hear the panels).

The stalls filled the bulk of the central area, though I was surprised by the relatively few stalls on offer, given that this was supposed to be the ‘largest Drag con in Europe’. More on that below.

We eventually realised the panel stage was at the back, but there was no signage to tell us where anything was. No layout for the stalls, generally pretty poor planning – but for a convention in its second year, I suppose it did alright.

As expected, there was pretty much everything a drag queen could want to get started, plus plenty of ‘your favourite drag queen’ themed merch for every queen that had a stand.

They had a lot of things that, frankly, I don’t have the balls to wear in public. I almost bought a baseball cap that said “Bring it to the RUNWAY” but the shape of it didn’t suit my head. Some of the drag queen specific merch was pretty cool (Manila had some great tees and tanks, and Ginger Minj’s ‘Dorothy’ style tee was amazing) but I don’t like wearing something so committal to another person or group – I don’t buy band tees for similar reasons; my style should be me, not someone else’s face.

I ended up buying a bunny hair accessory from a company called ‘Now, Voyager’ and a badge that says ‘Sashay Away x’.

We saw three panels of the five available to us while we were there:

The panels made the day worthwhile, but needed a lot more structure. Each batch of queens that appeared said loudly “we’ve JUST been told that we have to have a FREEFORM DISCUSSION” or words to that effect – each of them became an instant Q&A with the audience. While the queens on the first panel were funny, they seemed disgruntled by the lack of organisation in general (I imagine the US is much better at ‘Cons’) and we were squashed on the floor unable to get a clear view. Bendelacreme was somewhat of a surprise highlight, and while the others provided some strong laughs (Katya did so by generally saying “I disagreeee…”), Meth fell a little flat for me (though is apparently usually much better). ‘Wigs to Weaves’ was great fun, especially with Jinkx’s diabolical cackling making a regular appearance, though the subject matter was quite dry for a non wig user. The best panel was undoubtedly the last one, which was a celebration of POC (also P for Performers as well as People) and the struggles they face. Well worth waiting for.

Unless you count the barely digestible slough burger… I mean, beetroot burger, which tasted like it had been cooked on the same grill as the beef (I imagine it had, but we’ve heard of cleaning spray, haven’t we?) and had an extremely unpleasant texture. There were about four stalls around the perimeter open and serving cakes, coffee and sweet treats – all fine, but when one has aimed to stay for the whole day, it was pretty poor. This is more on Olympia than Drag World. The ‘KCB coffee’ venue did serve fairly nice queer-themed (unicorns and rainbows) cake and good coffee, and tap water was free (please DON’T pay the outrageous £2.25 for a 500ml bottle – if I had my way that would be outright legally and morally condemned). 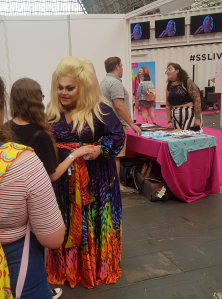 We had a good time, especially considering I was feeling a bit under the weather. It was lovely to have the most famous drag queens walking amongst us plebeians, and the panels were very interesting (even when they were about hair). I’d go again, with the only expectation that they need to keep raising their game, and I need to have a massive brunch somewhere excellent before attending.