I started writing a short story based on one I started reading not long ago about living a secret life. The potential for twists and turns was incredible, so I have written my own story, set for the modern day.

I realise that quite a bit of my fiction will involve LGBT characters. But having grown up pretty much exclusively with heterosexual, cis-gendered literature to read, I consider what might be an over-representation on my part to be a part of a grander balancing act. Then again, I don’t presume any of my readers will take umbrage at such choices.

Seven, maybe eight years ago, around the time I married, I received an email from someone I knew briefly during my stay in Italy. I toured there in my youth, part of an acting troupe that taught English in schools through sketch shows and musicals. The email came at a time when I was receiving congratulations from all sorts of people that I hadn’t spoken to in years: distant relatives; old flames – that is, the boyfriends of summers past; and the social media averse. Given the context of our relationship and the timing, when I saw the name – Matteo Bottiglieri – and the absence of a subject line, I somewhat arrogantly thought that this was to be a ‘Category 2’ email. The old flame reluctantly wishing me well in short paragraphs that thinly veil their true feelings and secret hopes that my new found happiness would be short-lived. 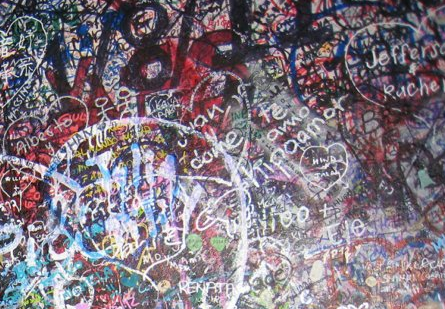 Matteo was very much a summer fling to me. I met him around Easter time while our group made a brief stop in Genova. We were to be there just two days, with a job at a local school on the morning of the second day. Not long to get to know anyone, but soon after the tour ended I went to visit him again for another couple of days on my way south to visit some new friends I’d made in the capital. He lived with his cocky housemate, ‘Alex’, who had a permanent ‘sopraciglio in alto’. He made every effort to judge my ‘stilo inglese’, in particular his hatred of my stompy boots, which I must say in my defence, were less for style and more for the comfort of being on an extended tour away from home.

They had a beautiful apartment. It was on the fifth floor of a building which, while rather ugly outside, had a beautiful staircase that spiralled around a central lift. The lift was a classic in itself, with the concertina doors and a little red carpet inside. You watched the ground fall away below as you ascended, the soft, warm white lighting in art deco sconces at tasteful intervals around the walls. The apartment itself was much larger than I was used to, especially considering all of us were recent graduates, and that I was from the crowded and cramped city of London. It had a balcony, two huge bedrooms, a modest square kitchen with a table, and an open-plan living room/dining room – which alone was the size of my flat back home.

On my first visit, my Italian was still very shaky. Despite completing an online course, I had been there for only three months and I was very aware that my interactions needed to be limited to transactional conversations and speakers with a more sympathetic ear – made worse by my talent for accents, meaning the locals felt licenced to speak at warp speed. Still, I managed to impress them by answering a number of questions in a book that Alex pulled out from a shelf behind me – by glancing at its contents, it seemed that one or both of them were studying for a medical entrance exam.

This was the extent of the eruditeness of the evening. Two glasses of red wine later, and the pleasantries and attempts at physics problems gave way to a different kind of biology and chemistry. We caught ourselves in a slow, pulsating rhythm, in a song we replayed several times that night, making music, art, drama. Our teachers would have been proud of such cross-curricular activity. I am unlikely to ever forget the passion and softness of that night.

So, you can imagine why I thought his email was firmly in ‘Category 2’. Suffice to say that it was anything but. He wrote in a style that made me think of an elegant, fifty-something Milanese: restrained, courteous, and a touch too formal for the relationship we had. Allow me to present you with its contents below, unabridged, and translated from the original Italian. I was not prepared for what I was about to read.

“I hear congratulations are in order, and I think an apology, too. It has been a long time since we were last in contact. I still have very fond memories of our time, which feels so long ago now. It is almost certainly my fault for the two of us not remaining in touch, and for that I am sorry. It is rare to find interesting people who speak Italian. Sinfully, my English is no better, so another apology there.

“Anyway, congratulations. I, too, was married not so very long ago and we are approaching our third anniversary. It is Alex, which may come as big a surprise to you as it was to me, or it may not. I was shocked to discover our feelings for each other, and thought we were just friends. My closest friends saw it coming and I did not. And now, here we are about to celebrate our third year.

“I have quite deliberately avoided using the word ‘together’ in the paragraph previous, because that would be a kind of lie. The truth is, I have not seen him in three months.

“Of course I have been to the police, but the situation in Italy is still not the same as it is where you are, I think. More importantly, this is the third time he has disappeared for a long period of time. The first time, he was gone for two months. We were just housemates and friends then, but of course I noticed his absence. Perhaps it was this absence that was a catalyst for our relationship. The second time, we had been married for just a few weeks when he announced that he was leaving for a time and that I should trust he would return. Indeed, several months later, just after our first anniversary, he came back. His hair was a lot longer, but still well kept, and his facial hair was gone. He had also put on a bit of weight. He was very apologetic, sorry that it took so long, and so on. When I asked him what ‘it’ was, though, he dodged the question. In weeks, he shed the excess weight, but he commenced tying his hair back. I made him promise never to do that again. Now, after more years, he is gone again.

“Why should this concern you? As you know, Alex’s English used to be much worse than my own. Though strangely, I overheard a phone call he had that was entirely in English, and shamefully I couldn’t understand much of it at all. He spoke quickly and with an assertive tone, to a woman called Giulia. Naturally, I asked him about it, and he explained that he had stayed in touch with English people that we had met to help him improve. I know he wanted to live in the UK for a little bit, because you know he really cares about fashion. He tried to get me to go too, a few times, because you really need doctors, but you know my English is ugly.

“Anyway, one night while he was asleep, I checked his phone. I know, I shouldn’t have done that. I was paranoid. But it has given me the only clue. There was only one Giulia in his phone. And I checked for the English spelling, too. Her name is Giulia Carlotti. I think you know her? I deleted my social media accounts but I searched for her online and one of the matches shows you as a friend.

“I thought it might just be that the two of you know the same Giulia Carlotti. It’s a small world after all, right? I wonder if you have been in touch with her recently, or if Alex has been in touch with you, maybe to improve his English as he said.

“I’m sorry again for writing to you like this out of the blue. Please try to understand that I am doing so out of desperation and confusion. I hope you are able to find out some answers for me. Maybe it interests you, too. I also hope I have the opportunity to visit England soon, because you owe me a tour. As my guide you must make sure I eat only good food (no Italian restaurants, I beg you).